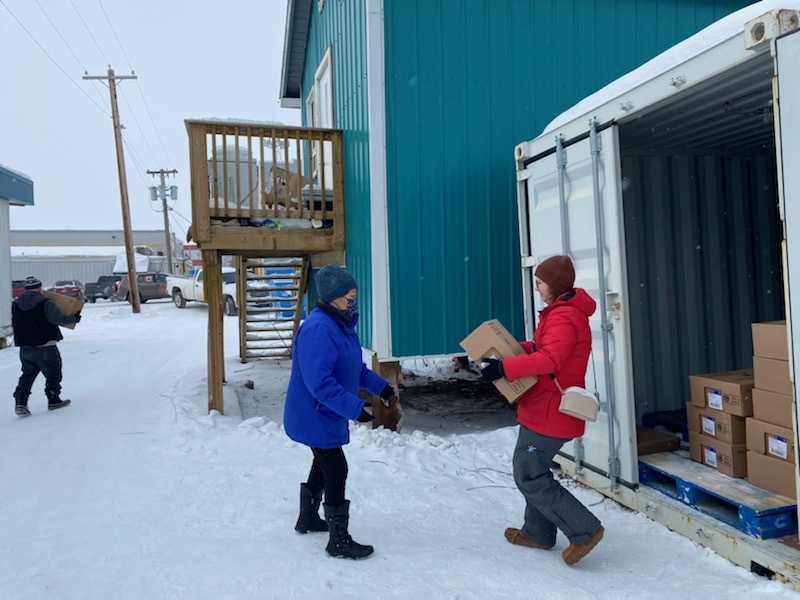 Posted at 07:53h in English Version by josephc

The drawn out nature of the pandemic has left people of all ages feeling increasingly isolated.

“It’s been an exceptionally difficult time for the kids,” says Inuvik Food Bank Chair Angela McInnes. “Children need that interaction with their friends. However, when it became evident after 7 months of lockdowns and social distancing that there wasn’t going to be a Halloween, we as a food bank decided that the young people in our community had enough disappointment due to COVID.”

That’s when Angela and her fellow food bankers decided to take Halloween into their own hands.

“We came up with the idea of handing out treat bags—but with a twist,” explains Angela. “Instead of being packed full of sweets, we opted to give out packages of fruit, yogurt, and juice boxes. Then on the Friday before Halloween, we opened up the food bank to the community. Kids came along with their parents, as did the elders and everyone was beyond thrilled. That’s because for a few brief moments they were all able to take a break from reality and have a good time. It was my absolute favourite thing that we did last year because of how much it meant to everybody.”

One particularly fond memory of that day for Angela involved a young girl and a pomegranate.

Being able to hold this event for the community was especially meaningful for the IFB.

“Before the pandemic swept in, we were almost at a point of having to close our doors,” states Angela. “Both money and food were running out, as were our options. But then emergency COVID funding started flowing in from Food Banks Canada. Now we’re in a better place financially, which has enabled us to stock up and give out the types of foods we were never able to before. Fresh goods such as cheese and butter, along with another item our clients are always raving about—coffee. The elders are extra appreciative of the coffee because it’s an item they can’t always afford to purchase on their pension. It’s little things like that, which, amidst all of the struggling and anxiety, offers individuals a beacon of hope. Something the entire world could use right about now.”